The day before yesterday, I came across a vivid explanation of the concepts of artificial intelligence and digital economy from CAS Academician XU Zongben, the director of the newly established Guangdong Laboratory of Artificial Intelligence and Digital Economy (GZ) [1]. Therein, he mentioned a very interesting metaphor of looking at the mirror, where the world within it is the virtual world, the third space aside from our physical world and human society. I was attracted by the concept, and tried to find the original source of it.

After some efforts, I found a pretty similar and reliable source of the concept of the ternary space (i.e. human society, physical space, and cyberspace), which was formally proposed in an academic article by CAE Academician PAN Yunhe in December, 2016 [2][3][4]. Therein stated that "the world has evolved from a binary space (physics and human society, or PH) to a ternary space (cyber, physics, and human society, or CPH)" and that "CPH interactions form new computing paradigms, including perception fusion, 'man-in-the-loop', augmented reality, and cross-media computing". He claimed that we are ready to enter AI 2.0 era. The article seems to be one of the supporting materials and driving forces for the proposal of China’s New-generation Artificial Intelligence Development Plan announced in July, 2017 [4:1][5]. 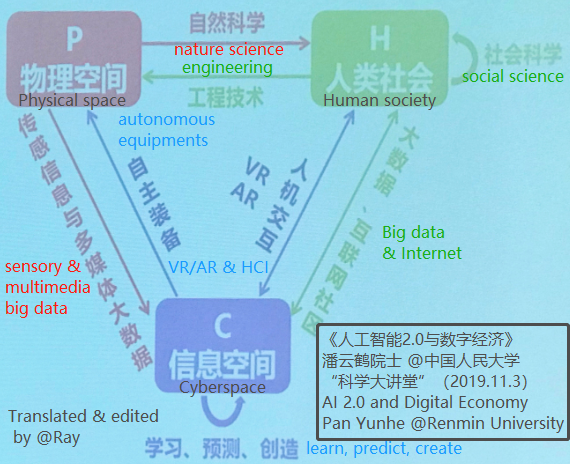 Though the concept of ternary space is a little abstract, it does help me to understand and reflect the world from a brand new perspective.

Life is about accumulating and connecting dots.

This post does not have a Table Of Contents